Beginnings of Life and other Sticky Wickets

Where do ideas come from? How do ideas develop? Once in your head, what’s next?

I am asked these types of questions when someone sees a recent piece of art or commenting on an architectural project.

A creative person lives in a world of collecting imagery and words, having alert senses for discovery, and over time building a library of ideas.

This library is what we pull from to develop original work. There are infinite numbers of combinations, as expressed by Mark Twain,

“There is no such thing as a new idea. It is impossible. We simply take a lot of old ideas and put them into a sort of mental kaleidoscope. We give them a turn and they make new and curious combinations. We keep on turning and making new combinations indefinitely; but they are the same old pieces of colored glass that have been in use through all the ages.”

The new book that my daughter and I are developing for the Shtick People Project started with an idea back in the early 2000s.

Most all of us have drawn stick figures since childhood. But it was years after remembering what one of my architecture staff members did that sparked the inception of a stick figure as sculpture. She would draw simple stick figures and place them around the office, like a smashed stick in a book, a stick hanging on the copy machine, a dead stick with x-eyes. Sometimes representing her mood and sometime just for comic relief. Those snippets of paper became the initial piece for an expanding idea for artwork.

As an architect dealing with people and their environments, my mind connected the notion of “people” sculptures representing life and circumstances. One of my favorite architects, Le Corbusier, represented proportion, the golden section and a man with a raised arm with a system he called Le Modular in 1948. The abstract figure made his architecture relatable to people when viewing project concepts.

Ah! the simple, relatable stick figure filled that place for me. They can be posed to represent humans in a variety of activities. They are original, expressive art and reasonably in expensive to produce. They are worldly, representing all cultures, races and sexes. 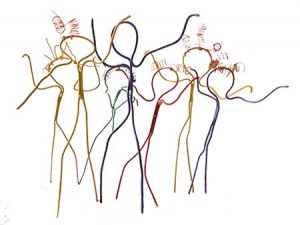 In the book, we have a page specifically exploring faces. So much can be learned from someone’s expression. We use many facial contortions to convey information.  Although the first book limits faces on the Shtick People, it has been interesting to use the shtick bodies alone to communicate a particular emotion or mood.

Since first introducing the Shtick People in 2005, I have produced and sold Runners, Trumpeters, Party People, Gardeners, and other active Shticks for art in offices, home, gardens and urban places. They have stories to tell. Many more opportunities are available.