The Shtick People are on the move again. The 10 new figures that I executed starting in May 2017 through May of 2018 for the project entitled, Rails, Trail & Art for Art on the Square. UMB Bank sponsored the project. The ten sculptures will be installed along the the St Clair County (IL) Metrolink trail. A ribbon cutting is planned in the Autumn of 2018. 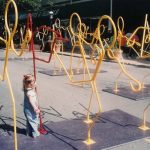 The figures are steel with a powder-coated finish and stainless steel. This project evolved from the 2005 introduction of Marathon at Art on the Square. The fifty yellow shticks running one-way and one red figure running the opposite way was big hit. END_OF_DOCUMENT_TOKEN_TO_BE_REPLACED 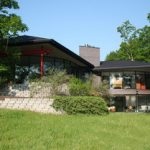 READY, SET …GO!  The launch of a new project occurs in order to fill a need or when a client wants to test an idea or develop a budget and to explore territory untouched by others.  The entrepreneur forces that are creating new paradigms and new industries make for an exciting time to be at work. Architecture is changing as work, living and play places require new ways to engage and solve new issues for the users. END_OF_DOCUMENT_TOKEN_TO_BE_REPLACED

Shtick People on the Move

Art on the Square 2017 will debut for a new sculpture project entitled, Rail, Trails and Art. 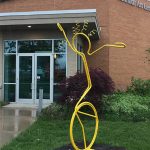 Thanks to a grant from UMB Bank, the project will consist of 10 or more sculpture of my Shtick People using different modes of transportation, including creative bikes and wheeled vehicles of all kinds. The sculptures will be placed along the St Clair County Metrolink alignment, in Belleville, Swansea and Shiloh.  The first finished piece will be a unicyclist standing over 8 feet tall and bright yellow.  The beauty of these pieces is the abstraction of the vehicle. Sometimes consisting of a simple circle of steel, I am purposely not incorporating all of the details of a real bike, for instance. The viewer will interpret the rest of the vehicle in their mind’s eye. END_OF_DOCUMENT_TOKEN_TO_BE_REPLACED 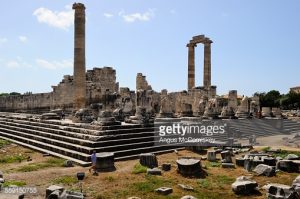 For most involved in a production, hell week begins the weekend or so prior to the show’s opening, when we begin putting all of the tech together with costumes, on a finished set, etc.  My “hell week” always begins with load-in and becomes a mad dash leading up to opening night. The past week was the usual scramble, finishing up the last of the set components to prepare for load-in.  We had some warm weather early in the week and I took advantage of those couple of days to spend some daytime hours in the shop.  After last weekend’s big building blitz (I love alliteration), I had the mine and platform facings to finish.  END_OF_DOCUMENT_TOKEN_TO_BE_REPLACED

The art studio is in “ruins”…

Over the weekend, we began building like mad.  Saturday, Richard met me about 10 and we worked until 3.  First item on the agenda were to make columns.  I had ordered 12′ long, 12″ in diameter sonotube concrete forms.  They are a coated, heavy cardboard tube that are used to make concrete piers.  At Home Depot, you can get them 4′ long and I have used those before, but you end up with seams across your columns and there is no good way to join them together to make longer columns.  And actually, a 12′ runs about $30 while a 4′ is $10, so the price is the same.  The caveat is that you have to plan ahead and order them shipped to the store. Once they arrive at the store, you have to have a way to transport 12′ long items.  Fortunately, Larry had left his trailer at the scenic shop for me to fill with wood scraps so I could use it.

END_OF_DOCUMENT_TOKEN_TO_BE_REPLACED 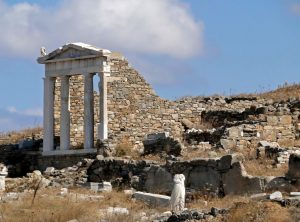 So, it has been a stupid long time since my last post.  Let’s just say that, for the last 6 months, my job status didn’t leave much time for creativity or blogging.  But, now that is done, I am back on track.

Starting “Zorba,” I really didn’t know the show, but love Kander and Ebb and respect their work. Even though it is an early one, I was confident that it was a decently crafted script and I have been looking forward to it.  Of course…  “Zorba” is an old show, like as old as I am. It predates the structural revolution of musical theater that really took hold in the 1970’s. END_OF_DOCUMENT_TOKEN_TO_BE_REPLACED